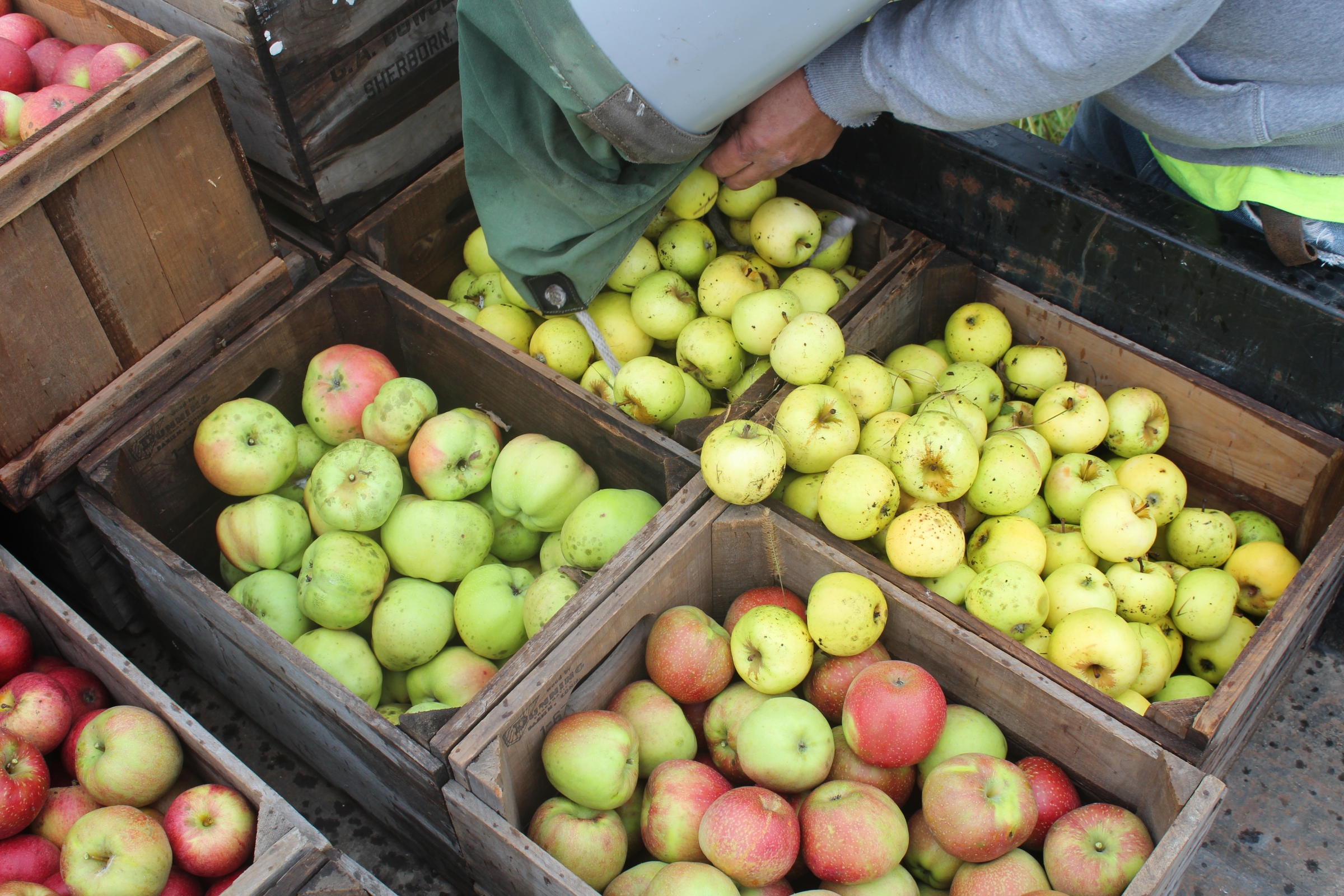 We planted a block of cider apple trees six years ago on semi-dwarf and standard rootstock.  These trees (most of them) have lived through winter and gypsy moth invasions, droughts, and continual vole and varmint pressure throughout the chillier months. They had a pretty decent growing season this year and have sized up nicely (for the most part).

In all we’re growing about 20 different varieties with help from our friends at Dowse Orchards here in Sherborn, MA just down the street where the trees are located. We planted a mix of cider oriented apple trees, including tannic, bittersweet varietals plus American acid bombs like Wickson and Ashmead’s Kernel. This year we have our first official harvest and are proud to report some of the progress. We collected a solid amount of Reine de Pomme, Major, Grimes Golden, Michelin, Calville Blanc, Chisel Jersey, Dabinett, Black Oxford, Golden Russet, Esopus Spitzenburg, Redfield, and Wickson, which are still ripening up. Check out below for more information on each of the different styles. This is just the beginning compilation of the apples we grow and use in our ciders. We will continue to update with more pictures and descriptions of all varieties.

Michelin. Small to medium-sized with yellow-green skin and a pink flush, Michelin is a popular traditional French hard cider apple that first fruited in 1872. It was named after M. Michelin of Paris, one of the original government appointed promoters of the study of cider fruits. It’s a “bittersweet” variety, high in tannins and low acidity, often used for blending in cider and produces a medium bittersweet juice.

Calville Blanc. Irregular shaped with yellow to pale green skin and light red spots, Calville Blanc is a traditional French dessert apple, that is also excellent for cider making. It’s classified as a “sharp” with lower tannins and higher acidity, known for it’s sweet, juicy flesh and rich sharp flavor. It’s also a very old apple. Originating in France as a chance seedling in the 17th century. We also use this apple in Legendary Dry.

Chisel Jersey. Small and round with a striped red and brownish-pink flush, Chisel Jersey is a “bittersweet” apple that is high in tannins and sugars. It produces a strong, rich, full-bodied, colorful cider that’s best blended with other apples.

Dabinett. Medium sized and flattish with red skin, Dabinett is a high quality “bittersweet” English cider apple variety that makes a sweet, full-bodied cider. We’ve found it’s also one of the most reliable bittersweet apples to grow. This is another apple we use in Legendary Dry.

Reine de Pomme. Translated as “Queen of Apples”, Reine de Pomme is an archaic French Apple thought to have originated in Normandy, France. It’s a “bittersweet” apple that is rich in flavor and high tannins.

Major. Medium sized with a pinkish red flush, Major is a ‘bittersweet’ apple high in tannins and relatively low in acidity. Dating back to the 19th century, it is a long established variety that was historically found in old farm orchards across the United Kingdom. It is also among the cultivars classified as ‘vintage’ quality meaning it’s capable of being used to make single-varietal cider.

Esopus Spitzenburg. Fairly large and oblong with red skin and crisp flesh, Esopus Spitzenburg is an American heirloom variety that was discovered early in the 18th century near Esopus, New York. It was widely planted in the United States in the 19th century and used for both dessert and culinary purposes. It has a rich sharpness often characteristic of dessert apples, which makes it a good apple for baking pies as well as making cider.

Black Oxford. Deep crimson in color, Black Oxford is a traditional apple from Maine that was discovered around 1790. It’s an all-purpose variety, that can be eaten fresh as well as used for making pies and cider. It has a well balanced flavor and firm flesh.

Golden Russet. Small yellow gold with an occasional orange flush and lot of russeting, Golden Russet is an old apple variety that was discovered in New York State in the 1800s.  It was discovered from a chance seedling of an English russet apple cultivar. It’s a versatile apple that is used for cooking and apple cider production. It’s juicy and crisp which also makes it good enough to eat fresh.  A favorite American variety for all purposes.

Wickson Crab. Small yellow-red, Wickson is a popular crab apple variety which is commonly used in cider blends. It was developed by Albert Etter in California, an apple enthusiast best-known for his work on pink-fleshed and red-fleshed apples. It is classified as “sharp” and is sweet, but is also highly acidic.  It’s a wonderful little apple full of tart and sweet and makes excellent hard cider. We’ve had Wickson apples come in as low as 2.8 pH for those cider makers out there yet still packed with sugar.